Following below are my videos for a few of the stories from this week's Finding Bigfoot TV program called "Surf's Up, Sasquatch". I signed an NDA prior to filming last July, so couldn't talk about what they did till the episode aired. I think spotlighting the Bigfoot Discovery Museum, their large tooth and some of the local stories is great.


In 1999, there was a sighting one mile from downtown Santa Cruz.

In 2012, there were two sightings in a Felton area where I've been hiking each week for the past year and a half. The first was on April 25 about 8:30 pm by a mother and daughter out driving. They saw an adult and a juvenile standing beside the road next to a tree. The second was on July 16 about 4:10 pm by my friend Ray. He saw an adult sitting in the bushes by a pond. These two sightings happened about half a mile from each other, so that's why I've focused so much time on that Felton area.
The day of Ray's sighting it was just luck that he tagged along and luckier still that he happened to go in the bushes beside the pond. It never occurred to me that there would be a creature that close to where people were. Since then, I only look in the bushes off trail, lol.
I already have a Bare Stick blog page devoted to these two 2012 sightings, so please go there to learn more and watch my investigation videos: Ray's Sighting.

Two other areas where the Finding Bigfoot team visited were Big Basin Redwoods State Park and The Forest of Nisene Marks State Park. Both these areas have had multiple sightings either inside or nearby reported over the years, but here's two I was involved in investigating.


Big Basin Field Trip
Nisene Marks Day Trip
A few weeks after the Finding Bigfoot team had left, I found these two items near the pond in Felton. 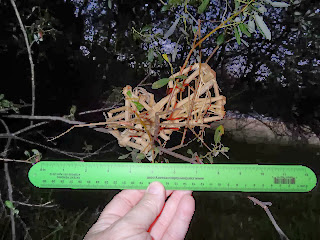 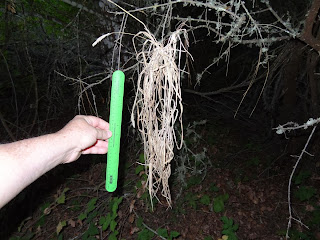 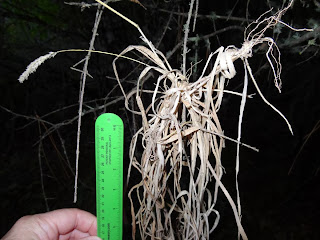 I recorded these Howls and Knocks during two Night Ops near Boulder Creek.

This is what the Boulder Creek location looks like in daylight.
(The full story is in my comment pinned below this video)