Yesterday, I had a shock. I stumbled onto a year old news article online saying a US Navy Veteran I had known for 20 years was a fake. Everything I had thought about him over the years changed. All the times I had talked with him and listened to his stories of valor in combat were fake. What a let down.

I couldn't help thinking about all my other friends and Veterans, many now gone from this world, who, like myself, had also been betrayed over the years by this person. I can see their faces in my mind's eye. What would they say?

Be sure to watch this ABC video to help understand why Stolen Valor is such an important issue:
I-Team: Phony lieutenant commander honored at Alameda's USS Hornet Museum

And here's a Mercury News article from a few days later:
"Frogman" admits his claim of World War II heroism was bogus

This got me thinking. A person who hoaxes or fakes bigfoot stuff is similar to someone who fakes their military background. They are both thieves.

A bigfoot hoaxer is stealing the credibility and integrity of all the past and present bigfoot researchers who have spent years seriously looking into the subject. You are stealing their honor. You are a thief. 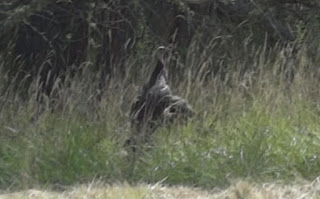